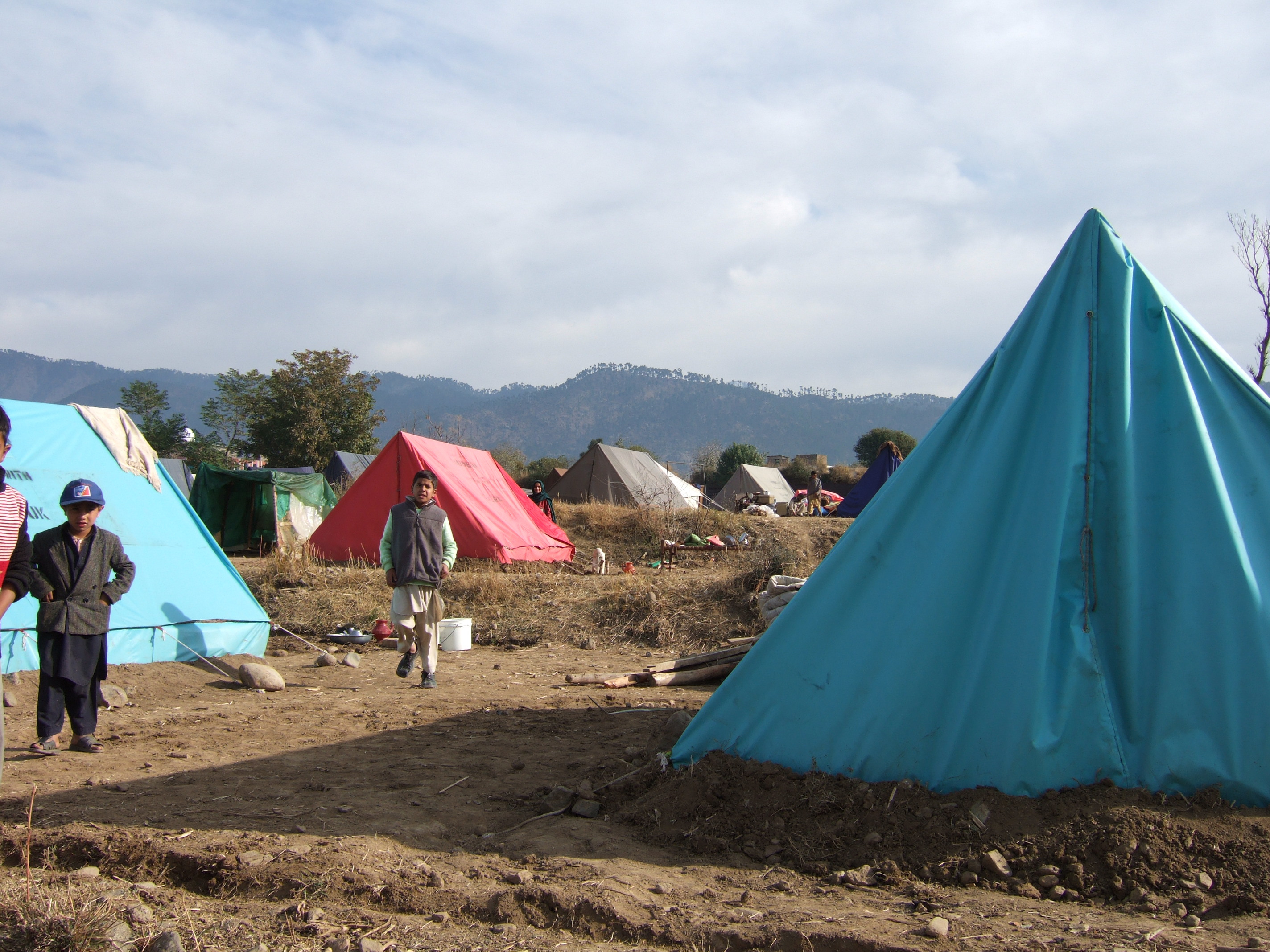 The villagers of Bedadi on the Pakistan Kashmir border were made homeless when their houses were destroyed in the earthquake of 2005. After initially providing emergency relief (in the form of shelter, food and essential non-food items) IDEALS then purchased a piece of land on which to build new homes. After lengthy administrative delays and an intensive building programme, fully funded by IDEALS and managed by CAMP (a local NGO), 26 families moved into new earthquake proof houses in February 2009: thus giving them great security and preserving their sense of community. Many of the villagers used the opportunity to acquire building skills under the supervision of master craftsmen and these skills will be used to support their families. A mains electricity supply was subsequently connected to each household and the children integrated into local schools.

The deeds of their houses were handed over to the villagers at a ceremony in Islamabad, attended by John Beavis and Andrew Ferguson, in April 2010.

Supported by IDEALS, a comprehensive survey was conducted at Bedadi village in 2008. We identified a number of children with significant health problems, including severe malnutrition, anaemia and visual impairment. Subsequently all these children were assessed and investigated by child health and eye specialists in nearby Mansehra city, receiving drug treatment and corrective glasses as needed. We also supported a three month supplementary feeding programme for the most underweight children at Bedadi, in conjunction with a series of health and hygiene workshops for all Bedadi families (to raise awareness of good feeding practices and reduce the risk of diarrhoeal and related illnesses): this was hugely successful, resulting in a significant reduction in the global malnutrition rate within the village.

There is a huge burden of trauma within FATA, arising primarily from road traffic accidents, gunshot wounds and landmines/unexploded ordnance. Obviously the burden is currently much greater given the conflict and floods ravaging the region. Due to a lack of suitably skilled health workers and the necessary equipment people are dying unnecessarily and being left with avoidable disability. In conjunction with CAMP, a local NGO, and the FATA Health Directorate, we began to address these issues with the following interventions:

The Primary Trauma Care (PTC) Course is the World Health Organisation (WHO) approved trauma care training package for remote, resource-poor environments. Over the three years we conducted a series of PTC Courses in Peshawar. Subsequently a group of highly respected local instructors established a Faculty (with representatives from each of the major teaching hospitals) dedicated to the teaching of PTC.

With our continued support the Peshawar PTC Faculty trained a cohort of 75 senior doctors from FATA hospitals. 17 of the most dedicated and skilled of these doctors were trained as instructors, to disseminate the PTC Course to the remaining hospital workforce in FATA.

In addition all of the Agency Headquarter hospitals within FATA were provided with the basic equipment necessary to provide life-saving trauma care for victims. By providing this equipment, those trained in PTC were able to utilise (and thus consolidate) their new skills immediately.

In conjunction with CAMP, a local NGO, we funded and ran a disability programme in Mansehra district for two years. This operated from a Resource Centre in Mansehra city, which acted as a focal point for the coordination of disability services in the district and the dissemination of information relating to those services to the disabled, their carers and the wider community. The multidisciplinary team also provided extensive outreach services: awareness raising workshops and collaboration with local schools to promote inclusive education for children with disabilities; household surveys to identify children and adults with disabilities; physical rehabilitation programmes, together with relevant training for the disabled and their carers; referral of the disabled to other agencies providing specialist services in the area (including those fitting prosthetic and orthotic devices); and the provision of mobility aids to the disabled (walking sticks, crutches and wheelchairs).

Maternal and newborn health outcomes in the region are appalling. The lack of skilled health workers contributes hugely to the problem. In partnership with CAMP, a local NGO, and in collaboration with the FATA Health Directorate, we began this initiative in December 2008: having recruited 15 young women with the necessary academic qualifications, motivation and family support, their 20 month training programme to become the first community midwives to operate in Khyber Agency and adjacent Frontier Regions began in April 2009. The training took place in Peshawar, coordinated by the Provincial Health Services Academy, under the auspices of the Pakistan Nursing Council. All 15 graduated successfully at the end of 2010, although they didn’t receive their professional certificates from the Pakistan Nursing Council and thus start work in their home communities until 2012. They are now providing essential ante-natal, delivery and post-natal care for mothers and their newborn babies, and IDEALS supported two of them to go on to complete further training to become lady health visitors. We also funded major rehabilitation and construction work at their training institute in Peshawar, upgrading facilities for future students.

As evidenced by the projects above, our nine year partnership with Community Appraisal & Motivation Programme (CAMP) in Pakistan has proved extremely successful. In those projects described above IDEALS acted as both donor and partner. Since then our contribution has been purely technical, with Dr Andrew Ferguson acting as CAMP’s health programme manager, providing: training for CAMP’s senior staff; support for health needs assessment and the development of health related proposals and grant applications; support for the monitoring and evaluation of existing health projects; and liaison with UN, governmental and NGO partners, and donors. This collaboration has resulted in a series of successful grant applications and the successful delivery of a series of emergency and developmental health projects in Khyber Pakhtunkhwa (KP) and Balochistan Provinces and the Federally Administered Tribal Area (FATA), regions devastated by floods and ongoing conflict in recent years. With CAMP we ran an emergency health programme in the flood affected Jaffarabad district of Balochistan that incorporated both static and mobile clinics, and continue to provide essential primary health care and maternal/child health services from two static clinics in Jalozai Internally Displaced Persons (IDP) camp, Nowshera district, KP: the largest IDP camp in Pakistan, with a population that has varied from 70-100,000 in recent years.

Ongoing projects are summarised below:

This is a major project funded by the German government, aiming to significantly increase emergency care capacity within hospitals and other key health facilities in the region. The priority setting (for construction work and purchase of equipment for target health facilities throughout FATA) process is now complete and a formal procurement process has begun. We are now developing resources for the training component of the project, which will focus on emergency care and major disaster response, as well as considering options for an expansion of the project over the next three years.

As a result of increasing beneficiary numbers (the camp population has again climbed to over 90,000 as a result of an escalation in the conflict between government and extremist forces in FATA) the World Health Organisation (WHO) asked us to establish a second health centre at Jalozai in May 2012, working alongside the four centres operated by MERLIN. Both our centres are seeing an average of 175 patients per day and recently received an extremely positive evaluation from the WHO (the current donor). Funding is secure until mid January 2014 and further grant applications have already been submitted to the WHO for a further project extension. The need remains high, as demonstrated by a recent and extremely worrying rise in the level of acute childhood malnutrition within the camp.

The project closed as originally planned at the end of the ARI season, but will hopefully be launched again next year.